What’s in your underwear drawer?

Let’s cut to the chase and face it ladies, we all have underwear earmarked for specific use.  I don’t know if guys do this or not.  I’d be open to have the conversation.

The reason this has been on my mind is because the last few classes I took at the gym, I wore the wrong sports bra.  For spin, I wear something not as binding as the girls are not moving about.  Zumba is another story.  I need support so that shaking doesn’t dislodge something that could end in a major malfunction. It happens, believe me. Body pump is a neutral zone.  Either one works.

So I am about to brave the threat of Winter Storm Juno and go to Zumba tonight.  The foot surgery is scheduled for Thursday morning so I am trying to get in as much as I can. (hmm, comfy bloomies for the OR?) But tonight, as I loom over my underwear drawer, I carefully select the right sports bra.  Not too tight, not too loose.  I got the new Fitbit Charge HR for Christmas so no more heart rate monitor strap below the boobs. It is quite liberating.

Now the bloomies are a whole other conversation and yes Denise, no panty line.  No tugging, no frustration.  Now you may say this is TMI, once again, but I say no.  I think many women struggle with bad underwear.  I posted some time back about a bad bra. While that is awful, bad bloomies are worse.

I have had roommates over the years and when you live with a bunch of women, no conversation is off limits.  We all agreed that you have date bloomies, sports bloomies and Ralph bloomies. (Ralph is what we call your special time of the month.) These categories must stay separated and never cross.  I believe the reasons are obvious. If you make an error, in the dark getting dressed, you will know before your feet hit the kitchen floor.  Something is askew.  If you ignore the sign, you will be out of sorts the whole day.

Finally, do we ever purge that underwear drawer?  Ever throw out a pair that has seen too many washes or stretches?  Hell no.  You never know when you need an old tried and true comfy pair to wear under your sweats on a sick day. What about a lucky pair?  Maybe you won that tennis match with the pair that said “Tuesday” on the front.  Remember the days of the week bloomies?

None-the-less choose your underwear carefully because the best outward facing outfit is nothing without a good foundation.  Wow, isn’t that the truth! 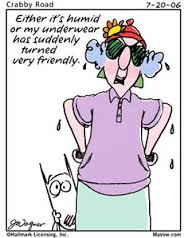