There is a terrible song within each of us.

In what appeared to be a random  sentence within a conversation I was having with Mike from my Albany office, the thought came into my head signaling what a deep comment.  He just let this sentence casually fly and it caught me, so I began to think about it.

This particular day I called Mike specifically because I heard Wildfire by Michael Martin Murphey. Read it here, the words are sad. We were talking about some of the great songs that had soul and meaning and that’s when he said, “There is a terrible song within each of us.” Wow. Is it true?  Do we only have terrible songs or do the terrible songs make us stronger to sing in happier times?

Many 70’s bands like Seals and Crofts, America, The Carpenters, The Eagles, Chicago sand songs about the times we lived in.  War.  Drugs. Rebellion. Bruce Springsteen!  The Boss sang of life and struggle, perhaps terrible? I don’t know but it certainly made me feel something when he sang. I saw him live in concert and I swear I wasn’t the same after that. He had both music and lyrics.

Speaking of which, Music and Lyrics with Drew Barrymore (Sophie) and Hugh Grant (Alex) sheds some light on what it takes to make music.  Take a look at the exchange below.

Alex Fletcher: It doesn’t have to be perfect. Just spit it out. They’re just lyrics.

Alex Fletcher: Lyrics are important. They’re just not as important as melody.

Sophie Fisher: I really don’t think you get it.

Sophie Fisher: A melody is like seeing someone for the first time. The physical attraction. Sex.

Alex Fletcher: I so get that.

Sophie Fisher: But then, as you get to know the person, that’s the lyrics. Their story. Who they are underneath. It’s the combination of the two that makes it magical.

So to Mike’s point, there may be terrible song within each of us but I hope that’s not all. In a down moment we may look to soothe ourselves by listening to or thinking about something sad. In a movie, that ‘terrible song within us’ can make the storyline really stick. But do you ever drive in your car, open the sunroof and crank up Walking on Sunshine by Katrina & the Waves or Sultans of Swing by Dire Straits. Pure joy. 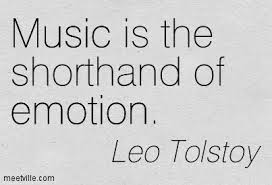