“He died of a broken heart.”

This evening I received a phone call from an old friend living in Florida. Marie is somewhere between 89-93 years old if I had to guess.  She called to tell me her brother-in-law, Paul, had died of a broken heart this week.  He wife died last year and he was never the same. Maria said Paul cried for her every day and all night. He missed her so. These four friends have been a part of our lives even though tucked away a bit. How we met them is just a great story.

In 1992, Chip and I took our first trip to Italy.  We signed up for a Perillo Tour for a 3 week visit to Italy.  Little did we know that Perillo Tours tend to attract an older clientele. We were the youngest by at least 35 years, no lie.  It was like traveling with one huge Italian family.  The people were great and we created life long friends, specifically Jean and Paul, Marie and Santo.   We have spoken and exchanged Christmas cards every year since.  On our 15th anniversary, Chip and I went to Little Palm Island off the Florida Keyes and ended our trip with a visit to our friends in Delray Beach.  It was wonderful and we had a ball.  The things you can learn from older people is phenomenal. They have done so much and lived to see some major changes in the world.  Paul and Santo are brothers and left Sicily when they were young.  They married Jean and Marie and built their lives.

Last year when Jean and Santo died, that Marie and Paul without their spouses, their partners, their loves.  It was too much for Paul and he dies at 95 years old. Marie called me tonight and we chatted. When I hung up the phone, I began to think about a love like that.  A loss so great that you no longer wish to live without that person.  Isn’t that spectacular?  Does it still exist? In a society where the divorce rate is over 50%, is it possible?

Marriage is tough. Relationships are tough.  But can we be tougher?  Can it work so that two people stay together in sickness and in health till death do us part?  I hope so.  I married for love.  I knew it when we were crossing the street on our first date and he made sure I got there safely.  I knew it when I walked down that long aisle at St. John the Evangelist and saw him standing there, waiting for me. I knew it  during child birth, breast cancer, and every challenge in between.

I also know it when I want to shank him; when he forgets two out of the three things I send him to the store for.  I knew it when I ripped the rear view mirror off his car and cried when I called him at work to tell him and he said ‘it’s ok’.

Does Chip feel the same way?  I sure as hell hope so!  The older I get, the more I think about that day and what will happen to the one left behind. That, my friends depends on what you believe.  It scares me some what and at the same time it is peaceful.  We have a lot left to do together and many more challenges to get through.  I hope both my heart and soul have a long way to go. 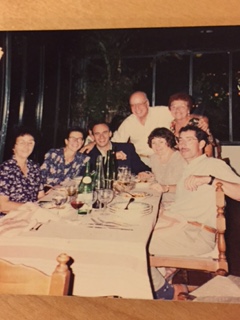 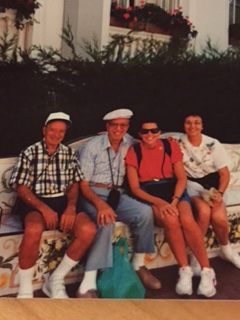