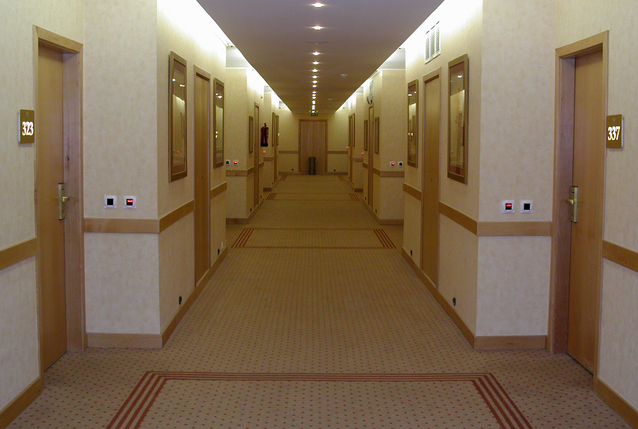 Sometime in the early evening last night I was disrupted by my ‘neighbor’ who through these paper thin walls blared his radio/TV.  I called down to the front desk for assistance.  She called the room, came down and banged on the door all to no avail.  She called me back and told me the occupant was unresponsive. Little did she know that no truer words would be spoken? This went on until about 10:30 or so.  My melatonin kicked in and off to sleep I went.

Abruptly at 2:30 am I heard a frantic banging on a number of room doors and ultimately an attempt to enter my room.  The door knob was pulled and yanked and I could see the shadow of footsteps outside.  Then it stopped. Through the peephole, I saw it was a woman.  It became quiet for a bit and then heavy coughing, whining and more frantic attempts to enter a room.  I once again called the front desk.  I explained what was happening and this poor little clerk said she would come and check it out.  I told her to be careful and I waited.

In the morning I spoke with the front desk clerk and we shared our perceptions and experiences of the night before.  The person outside my room in a frantic state was a totally naked young woman. After all the noise and excitement, she was passed out, hence the silence.  She had attempted to gain entry to the hotel ‘kitchen area’ looking for a snack, Fruit Loops—naked?  Really?

She had no idea which room she was in, hence the frantic banging and attempted entry to any room including my room. The night clerk wrapped her in a sheet and together they determined where her room was.  She issued the now sheet wrapped woman a new key (since she had no clothes on, she was not carrying one) and off she went.

The questions flooded my mind:

You cannot make this up. Is there a moral of the story?  Nothing, I’ve got nothing and I am finally speechless. This was a first.