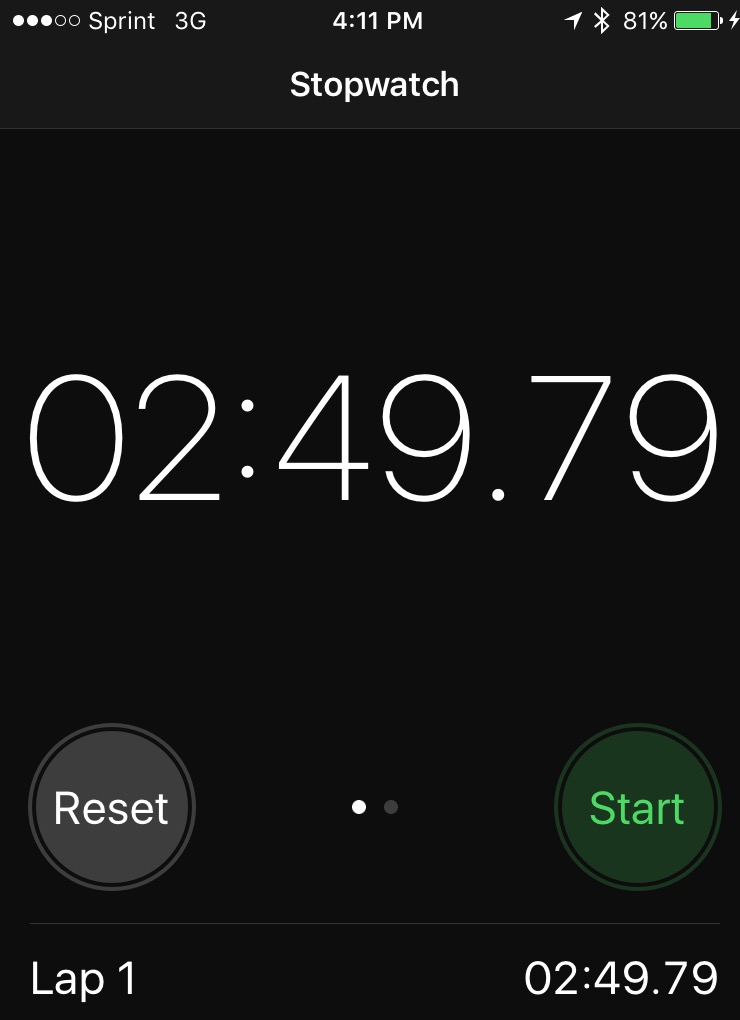 Are you wondering what this means 02:49.79? Why 2 minutes and 49 seconds?  Two minutes of what?…hmmm. Basically 2 plus minutes of discomfort. I tried a little experiment on my ride to Delaware today.

Every  four weeks or so I drive to Delaware to spend a few days with my team and the company.  It takes me about 5 hours and 15 minutes to get there, because I would never speed except perhaps in the State of New Jersey where I think it is illegal NOT to speed.

This trip has been fine tuned these last 13 months and I have it down to a science.  I calculate for coffee stops, bathroom breaks and pit stops in New Jersey for gas since they pump it and it was 31 degrees.   I have a playlist to keep me upbeat and motivated for the whole five hours.  However, today I noticed my mind was wandering.  I have been stressed about work and family and I have a lot on my mind.  Amelia isn’t well, Jack is all over the board and I worry he does too much and Chip is recovering from surgery.  Even Izzy has been in a funk.

So these things are going through my mind and at about an hour or so out of Delaware, I thought to myself, I wonder if I can drive in silence? I have literally never done it. Would it be calming?  Could I calmly work through some of the thoughts and issues I am facing?  What the heck, I’ll try it.

I turned off the phone along with the crazy voice giving me driving directions.  The music cessation was the hard part.  I hesitated before stopping it.  I went to the stopwatch app on the phone, took a deep breath and hit start.  I was plunged into silence. Just the sound of traffic and the road.

My mind was not quite ready to be silent so it was a struggle.  I thought at least 5 minutes had passed but when I glanced down it was only one minute later.

So I turn to that stupid breathing exercise the yoga instructor suggested and now I am sure at least 4 minutes have gone by yet it was only 2 minutes later.

I tried one more time and just said to myself, “What the hell am I doing? ” I took the stop watch and ended the timer at 02:49.79 and finally let out a deep sigh of relief.  It may not have helped my relaxation efforts that I had Death Wish coffee for breakfast, a dry cappuccino at 11am and a latte with an extra shot all before 4 pm.

I turned the radio back on and like a gift from God, Boston’s We’re Ready began to ooze from the speakers and better than a warm blanket began to calm me.  Ahhhh. While I cannot sing like they can, I am alone in the car so what the hell and off I go.

Two minutes seemed like an eternity, three minutes an impossibility.  Some time soon I will share the struggle I recently had at a yoga class faced with 8 minutes of silence.  I would have rather had my eyebrows waxed or a root canal. This silence thing will be a work in progress for me that may or may not ever be successful. Please note my heart rate never dipped below 92 bpm.

Silence is overrated. We have eternity to be silent, but I’d like to think ‘my heaven’ is a music fest with a massive kitchen and some serious speakers pumping out the tunes.